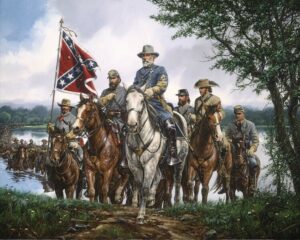 Rev. John Schildt will present “Roads to Gettysburg” on Wednesday, August 4th.  Everyone know s about Gettysburg. But how did the troops get there? This is an epic story of 175,000 men and all the equipment of war covering , in some cases, 200 miles in two weeks, from the Rappahannock River to the fields of Gettysburg.. 100,000 men, wagons and caissons crossed on two pontoon bridges, spanning 1600 feet, resting on 64 boats.  It is the story of rain , heat, thirst and sunstroke, as they marched through Maryland and Pennsylvania towns.