Colonel Edward M. Mobley was a local hero.  He was a Civil War veteran, volunteer firefighter and served as sheriff of Washington County. After the war Mobley was active in the local G.A.R. post.  On Wednesday, July 21st, Antietam Battlefield Guide, Justin Mayhue will present his Summer Lecture Series talk, – “Col. Mobley, 7th Maryland Volunteer Infantry in the Civil War”, which was the subject of his latest book. 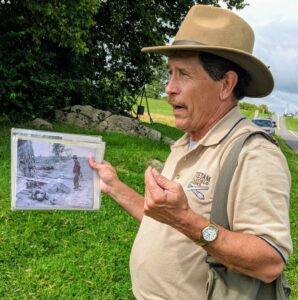 Justin Mayhue is a retired Battalion Chief of the Hagerstown, MD Fire Department, docent at the Hagerstown Fire Museum, author five books.  He is the past president of the Hagerstown Civil War Roundtable and he has been an actor in God’s and Generals, Ladder 49 and numerous History Channel projects.  Justin is an Antietam Battlefield Guide certified at Antietam, Harper’s Ferry and South Mountain. Justin has conduct over 1.000 career tours.

These outdoors programs will be held at the Jacob Rohrbach Inn on Wednesday evenings at 7:oo p.m.  Even though those programs are outdoors, guests are encouraged to wear face coverings and to social distance as much as possible. To ensure adequate seating, please bring a chair.  In case of inclement weather, lectures will be held at the Sharpsburg Christ Reformed UCC Church at 117 Main Street. For updates and a full schedule of presenters & topics check our Facebook page.