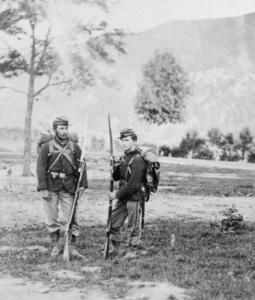 On September 15, 1862 would be the largest surrender of Federal forces in US history until 1942. Who were these soldiers? According to the records over 10,000 Union Soldiers surrendered. They came from several states and many had been in the army less than six weeks. The following images of some of those men represent these soldiers. In this presentation you will be shown the faces and history of several soldiers who were there. Quotes from several soldiers will be shown.  A map will orient you to their location on the field. Each of these soldiers has a story and I will tell you a little of that story.

These outdoors programs will be held at the Jacob Rohrbach Inn on Wednesday evenings at 7:oo p.m.  Even though those programs are outdoors, guests are encouraged to wear face coverings and to social distance as much as possible. To ensure adequate seating, please bring a chair.  In case of inclement weather, lectures will be held at the Sharpsburg Christ Reformed UCC Church at 117 Main Street.   Parking is available on Main and Hall Streets.  For updates and a full schedule of presenters & topics check our Facebook page.