Battlefield Guide Jim Smith will be our first speaker of the season on Wednesday, June 2nd.  Jim will present his Summer Lecture Series talk – “The most successful in its work”: Orlando Willcox’s division in the Maryland Campaign”.  Newly released from a Confederate prison, West Point graduate Orlando Willcox took command of a division in the IX Corps less than a week before the Battle of South Mountain. His troops fought hard at Fox’s Gap and formed the right end of the Final Attack at Antietam, falling back under orders that Willcox received three times before obeying. 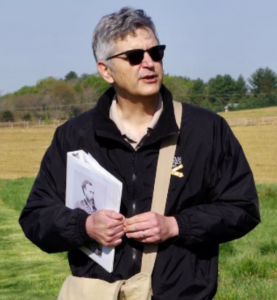 A native of Miami, FL, Jim Smith is a lifelong student of the Civil War. He has volunteered at Antietam National Battlefield since 2017 and has been a certified battlefield guide since 2018. Jim is a member of the Antietam Institute and lives with his family in Millersville, MD.