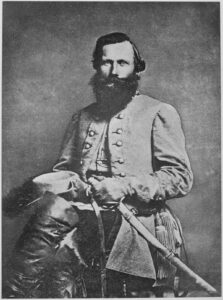 Jeb Stuart has become a legend among the leaders of the Civil War and he and his three brigades were tasked with important functions during, before, and after the battle of Antietam. Brad’s presentation will cover Stuart’s responsibilities and how well he and his men accomplished them. The fights prior to the battle of Antietam– along National Road (Wade Hampton’s brigade), the battle in the streets of Boonsboro (Fitz Lee’s brigade), and at Crampton’s Gap (Thomas Munford’s brigade)– will be covered.

These outdoors programs will be held at the Jacob Rohrbach Inn on Wednesday evenings at 7:oo p.m.   Even though those programs are outdoors, guests are encouraged to wear face coverings and to social distance as much as possible. To ensure adequate seating, please bring a chair.  In case of inclement weather, lectures will be held at the Sharpsburg Christ Reformed UCC Church at 117 Main Street.  Parking is available on Main and Hall Streets.  For updates and a full schedule of presenters & topics check our Facebook page.