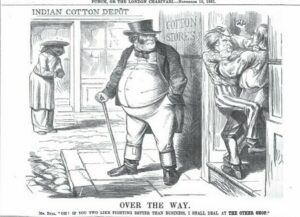 Britain’s shortage of cotton was partially made up by imports from India and Egypt; Punch cartoon 16 November 1861.

On Wednesday, July 29,  Antietam Battlefield Ambassador, Nigel Wainwright will provide an overview of the American Civil Wars’ impact on international relations and trade.  He will also discuss how a global political war got dangerously close to being a global shooting war by identifying some of the main characters involved. 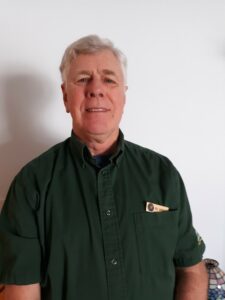 Nigel Wainwright was a Police Officer in England for 30 years qualified as an instructor in criminal law and advanced motorcycle riding.  He also worked on road accident investigation /reconstruction.   As a hobby Nigel spent 37 years setting up and running a program teaching motorcycle riding safety mainly new to young riders. The program later became adopted by the British government and is now legal requirement.  Nigel was awarded the British Empire Medal by the Queen for services to the community.  In 2008, he retired and moved to Martinsburg, WV with his American born wife. Since first visiting Gettysburg in 2004 Nigel has had a keen interest in American history generally and civil war history in particular. In 2017, he decided to channel his interest into a more practical use and became a Battlefield Ambassador at Antietam National Battlefield which has given him a much larger understanding of the whys and wherefores of the Civil War and great satisfaction in sharing that understanding with visitors to the park.