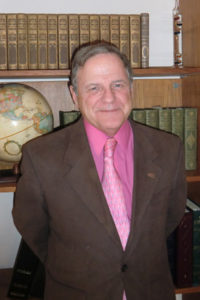 A retired high school history teacher, John Michael Priest has been interested in Civil War history since an early age. He is a graduate of Loyola College in Baltimore and Hood College in Frederick, Md., and has written extensively about the Civil War. His many books include “Antietam: The Soldiers’ Battle (1989);” “Before Antietam: The Battle for South Mountain (1992);” “Nowhere to Run: The Wilderness, May 4th & 5th, 1864 (1995);” “Victory Without Triumph: The Wilderness, May 6th & 7th, 1864 (1996);” and “Into the Fight: Pickett’s Charge at Gettysburg (1998).”

Praised by legendary historian Edwin C. Bearss as the “Ernie Pyle” of the Civil War soldier, Priest appeared on the Discovery Channel’s “Unsolved History: Pickett’s Charge (2002),” and served as a historical consultant for the miniseries “To Appomattox.” His newest work, “Stand to It and Give Them Hell!” chronicles the fighting on July 2, 1863, from Cemetery Ridge to Little Round Top from the perspectives of the soldiers who fought the battle.  Mike is also an Antietam Battlefield Guide.

On Wednesday, June 14th, Mike will present his Summer Lecture Series talk Antietam: The Soldiers’ Battle.  John Michael Priest has carefully weaved together over 200 recollections, diaries, letters, and regimental histories making it easy to visualize the battle as the average soldier experienced it. During his talk he will provide a definitive study of the battle of Antietam from the soldier’s view.