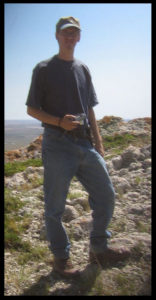 Matt Borders is a 2004 graduate of Michigan State University with a BA in US History and a double cognate in Museum Studies and Historic Preservation. While at MSU he was first an intern and then a seasonal for the National Park Service at Antietam National Battlefield. Following his undergrad he immediately went to Eastern Michigan University for his MS in Historic Preservation, with a focus in Battlefield Interpretation, which he earned in 2006. While at Eastern Matt again worked at Antietam as a Seasonal Ranger.

Upon graduation he taught for a year at Kalamazoo Valley Community College before accepting a contractor position with the National Park Service’s American Battlefield Protection Program. Moving to Maryland in 2007 with his wife Kira, Matt worked as a contract historian for the ABPP for the next four years, personally surveying over 100 different American Civil War battlefields in the deep south and western United States. In 2011 he became a term employee of the ABPP and continued with his work as the program historian as well as additional duties related to the program’s preservation grants until 2013. Over this period Matt also became involved with the Frederick County Historical Society as one of the developers of the Frederick City Civil War Walking Tours, a member of the Frederick County Civil War Roundtable and as a volunteer and Certified Battlefield Guide for Antietam National Battlefield.

Currently Matt works as the Assistant Unit Manager and historian for the Antietam and Monocacy Museum Stores. He continues to volunteer regularly, as well as give tours of Antietam, and is currently working on his first book.

On Wednesday, July 20, Matt Borders will present his  Summer Lecture Series talk “Spy Game in Western Maryland“.  Matt’s presentation will be on the important and influential use of spies in Maryland during the Civil War by both Union and Confederate forces. The presentation focuses primarily on central Maryland as it was the highway of three separate Confederate invasions, and looks at some of the major personalities both in and out of uniform that were operating throughout the region. The Spy Game in Maryland during the Civil War was a microcosm of the war itself with people of all backgrounds becoming involved in this risky venture. Neighbor distrusted neighbor, and everyone was suspect. Come hear how these first steps in military intelligence gathering led to a professionalization of the practice as the war continued and why many of the nations players in intelligence today trace their origins to the Civil War.

These Wednesday evening programs are free and open to the public. They will be held outdoors on the grounds of the Jacob Rohrbach Inn at 7:oo p.m. Feel free to bring a chair or blanket to sit around the event tent. IIn case of inclement weather talks will be moved to the Sharpsburg Christ Reformed United Church of Christ. Parking is available on Main and Hall Streets.
Check our Facebook page for updates.