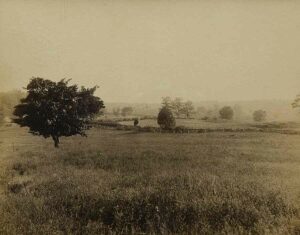 On the late afternoon of September 16, 1862 Union soldiers pushed down the Smoketown Road as they pursued Confederate cavalry. Upon reaching the Samuel Poffenberger farm the 13th Pennsylvania Reserves, the “Bucktails”, deployed as skirmishers and crossed his fields meeting stiff resistance from John Bell Hood’s Confederates.  The Bucktails continued to advance to the edge of the woods exchanging volleys with Hood’s men.  Colonel Hugh McNeil, commander of the Bucktails, stood to encourage his men to push into the woodlot, “Forward, Bucktails, Forward!” just then he was shot through the heart and died. His angry men jumped over the fence rail into the woods but were checked by the stubborn Rebel battle line.  Other Pennsylvania Reserve regiments moved into the East Woods as support, but as darkness set in both sides settled in just yards apart from each other laying on their arms.  Just north of the house and barn Union soldiers from Brigadier General James Ricketts Division bivouacked for the evening.

The Battle of Antietam started on the Samuel Poffenberger farm in what is known today as the East Woods. The farmstead is still a working farm on private property and it remains in the stewardship of the descendants of the Poffenberger family.

In 1791, German-born immigrant, John Miller arrival in Washington County, Maryland.  Miller was part of the wave of German farmers that moved from south central Pennsylvania into the area. According to the tax assessment for Sharpsburg Hundred, by 1803  John Miller owned 632 acres of “Alese [Ellwick’s] Dwelling” and “Joe’s Farm,” both located north of the town of Sharpsburg. 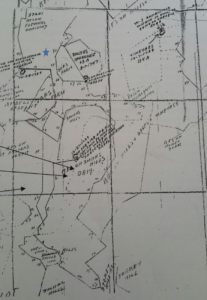 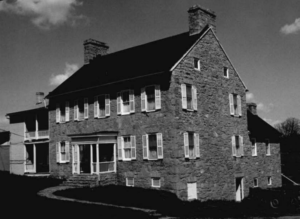 Most of the acreage from Ellwick’s Dwelling would later be know as the Samuel Poffenberger Farm.  John and Catherine Miller first built a log house on the property, then a stone house was built between 1802 and 1804.  The 2 1/2 story field stone house had five bays with a wing built over the spring and contains the kitchen with a massive cooking fireplace.  Under the main house the cellar has three rooms and another large service fireplace.

Like the other early farmers in the Antietam Valley, the Miller’s cleared more and more of the land for farming.   When John Miller died in 1821, his extensive land holdings were divided among several of his children.  Daniel Miller, the oldest son was living on a new farmstead to the east of his father (listed as D. Miller on the 1859 Map of Washington Co.). John Miller’s other son Abraham, received full interest in this farm.  After thirty years improving the farmstead, Abraham moved west to Illinois.  During this period a large stone bank barn was built, a number of dependencies, including a wagon shed and a fenced orchard north of the barn along the farm lane leading out to the Smoketown Road. 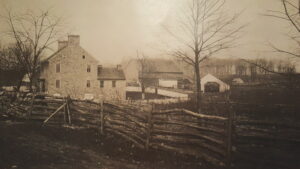 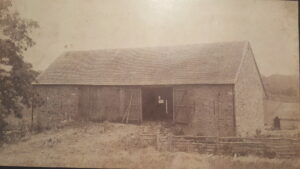 In 1854, the property was acquired by Jacob Poffenberger who sold it the following year to his son Henry Poffenberger.  It is possible that Henry and his family lived at the farm during this brief period. On the 1860 Census, there is a Henry Poffenberger listed next to Michael Miller (Daniel’s son).  Sometime before 1860, a tenant house was constructed  just south of the house along the road leading north out of the woods.  The farm hand living next to Henry was a David Jacobs.  According to the battlefield maps produced by Ezra Carmen in 1908, and post war photos, the tenant house was occupied by a Simon P. Morrison in 1862. 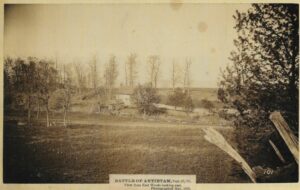 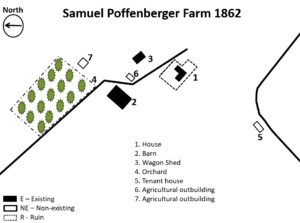 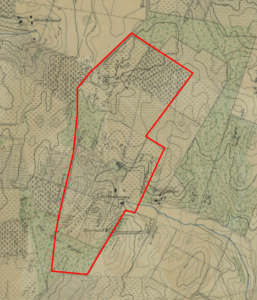 Approximate property boundary of the S. Poffenberger farm in 1862 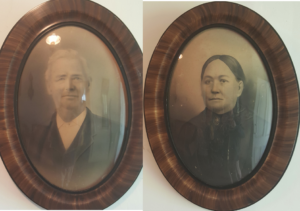 “On April 1, 1862, Samuel Doub bought the farm for his daughter Catharine and her husband, [Samuel Poffenberger] for $11,101.29”.  Samuel was one of several children of Jacob Poffenberger who lived east of Bakersville along the Hagerstown Pike.  At 24 years old, Samuel was still living and working on the family farm until he married Catherine on January 22, 1861. The following year, the young couple moved to the farm gifted to them from Samuel Doub.

The Samuel Doub farm was just off the Boonsboro Pike near Centerville or Keedysville (near Bonnie’s at the Red Byrd restaurant today).  At the time of the Battle of Antietam the Poffenberger’s did not have any children. Their first child was born in 1865  and they would have six children, unfortunately only three would survive to adulthood.  It is believed that the young couple went to Samuel’s parent’s farm north of the battle area for safety. 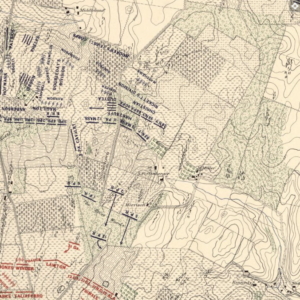 At daybreak, the Battle of Antietam resumed in the woods south of the farmhouse and spread to the west to the Poffenberger’s neighbors, David R. and Margaret Miller. Union forces pushed south into the Confederate battle lines. Back and forth the sides pushed the other back through the East Woods. Finally, the Union Twelfth Corps, under Major General Joseph Mansfield arrived on the field near the East Woods. 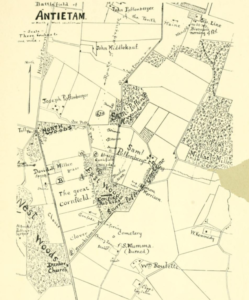 John Gould Map of the Antietam Battlefield where the 10th Maine fought and Mansfield wounded.

Being new to command and short staffed, Mansfield moved forward to deploy his infantry regiments into position when another Confederate attack struck.  Mansfield had mistakenly thought the troops to his front were Union, yelling out to his men, “You are firing on our own men!” But the soldiers from the 10th Maine try to convince him otherwise. Suddenly with a heavy volume of fire from the woods, Mansfield replied, “Yes, yes, you are right,”. Mansfield’s horse was hit and a bullet caught him squarely in the right chest. 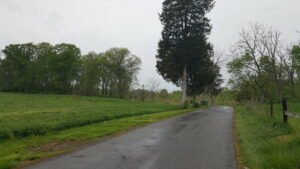 Location of Gen. Mansfield wounding near the East Woods.

Mansfield was taken back up the Smoketown Road to the George Line farm when he would die the next day.  A division of the Twelfth Corps continued to push the Confederates through the woods, beyond the burning Samuel Mumma farm to the Dunker Church plateau. With no more threat from direct fire, the Samuel Poffenberger farm quickly became a field hospital and would be known as the “Stone House Hospital”.

Union and Confederate soldiers would be treated at the Stone House Hospital. Dr. Elisha Harris noted on one of his visits after the battle, that “75 soldiers were hospitalized, but the house had a capacity for 225”.  The Union surgeons were Dr. Chaddock and Dr. Young; Dr. Pierra, a Confederate surgeon, assisted the wounded.  Dr. Harris said that the Stone House hospital was “faithfully managed, every patient properly and kindly treated. Success good. No ambulances. Dr, C. has been overworked: he had but one assistant except a Confederate surgeon, he has taken care of his patients very faithfully”. 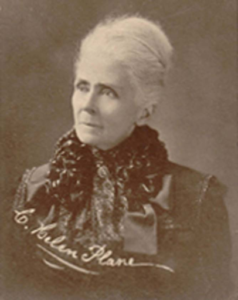 One of the Confederate soldiers that was treated at the Stone House hospital was Captain William F. Plane.  He was critically wounded while leading a company of the Sixth Georgia Infantry in the Cornfield.  On September 9, Captain Plane had written to his wife, Helen back in Baker County, Georgia just before leaving Frederick.  He had talked about the beginning days of their campaign into Maryland and that he would be sending “an enameled leather bag with shoes, button, needles, thread & pins” to her the first opportunity he had.  He closed with, “God bless you my dear, and our baby boy. Love to Ira & the children. I am hurried up & hardly have time to say a word more. God bless all & give us success and peace”. “Yr own Willie”

This was the last letter Captain Plane wrote to his wife. On September 21, Colonel Alfred Colquitt, the brigade commander and very good friend to the Planes, wrote to Helen to notify her of her husband’s death.  Col. Colquitt explained that her husband had been seriously wounded and fell while trying to carry Col. Newton from the field.  As much as Colquitt wished to believe  Capt. Plane was just wounded and in the enemy’s care, he had found out the he and another officer were buried.   According to the 1868, Bowie List, Capt. W. F. Plane, 6th Ga, was buried on the Samuel Poffenberger farm. 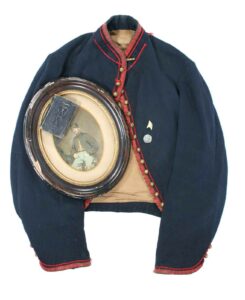 Private Edward N. Fulton of the 72nd Pennsylvania Volunteers was shot through both legs while fighting in the West Woods.  He was evacuated to the Stone House hospital for treatment.  On October 4, he wrote his mother from the Stone House hospital discussing his wounds and the care he is being given.  He closes with, “We are all to be moved to the General Hospital about 1 1/2 miles from here“. The next day, Fulton was moved to the General Hospital at Smoketown and the remaining wounded soldiers at Stone House hospital were moved to other locations as well.  The Samuel Poffenberger farm was appropriated for 19 days by the Union army and it is very possible that Clara Barton administered assistance to the soldiers there during her time at Antietam. 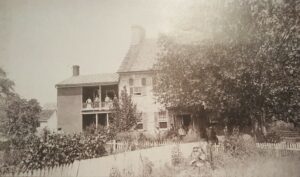 It is almost certain that claims were submitted for the use of the farm as a hospital and damage to the fields and fencing, but no record has been found. In 1868, Samuel paid $12,442 to his father-in-law,  Samuel Doub for the title to their property.  Over the next several years, the Poffenberger’s restored their farmstead as their family grew.  Around this time it is believe that a brick wing was added to the house, it may have encompassed a summer kitchen on that side of the home. 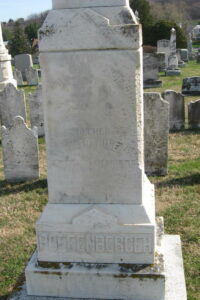 By 1880, Samuel and Catharine’s son, Edward, took over the farm operations as his parents moved to Antietam Street in Sharpsburg.  Catharine passed away in 1897 and Samuel died in January, 1917. They are buried together in the Boonsboro Cemetery. 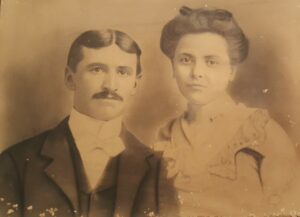 Soon after the death of his father, Edward Poffenberger retired from farming.  Over the next thirty years he rented the farm out until his daughter, Erma U. Poffenberger Kefauver and her husband Millard bought the property in 1948. Erma and Millard completely restored the house and many of the “precious family heirlooms. Samuel Poffenberger’s rocker, dry sink, dining table and tall clock are still in use”.  (According to Nancy Kefauver, Samuel Poffenberger purchased the clock for $10. and it was a wedding gift to her and her husband.  It has always been in the corner of the dining room.)

Their son, Millard Kefauver, Jr., was raised on the farm and went off to Johns Hopkins to college.  It was here where Millard met his future wife, Nancy Neill. They were working on degrees in mechanical engineering and mathematics. The couple married in 1956 and shortly after their wedding Millard convinced Nancy to move back to the dairy farm.    Growing up in the city, Nancy know nothing about farming but loved animals. Nancy said that her husband [Millard] never took to the cows and that the feeling was mutual among the cows, so she became the primary milker and she officially retired from the milking job four years ago.  Nancy still lives on the farm.

For 166 years the farmstead has been in the Poffenberger-Kefauver family and will remain so as a great example of private stewardship of the land and an eyewitness to history. 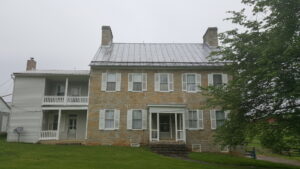 *We are very grateful to Nancy Kefauver for taking the time to talk we us about the history of the farm, her family and sharing the photos of the her family and Poffenberger-Kefauver Farm.

* Photos provided by Nancy Kefauver of the farm and family did not have dates when they were taken, most likely between 1885-1901.

Posted in: Farmsteads at Antietam
Tags: Battle of Antietam, civilians during the battle, farmsteads, Sharpsburg