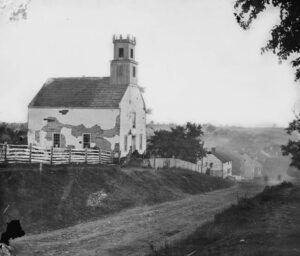 Lutheran Church after the Battle of Antietam, 1862.

The residents of Sharpsburg not only witnessed the bloodiest day in American history, but they faced the day-to-day hardships on their doorstep for duration of the Civil War. Before the war, Sharpsburg was a thriving community of merchants, clerks, laborers, farmers, and several canal men. Many of those who called it home were of English, German, Scots Irish, or Swiss descent; they were Methodist, Lutheran, and Dunkers. 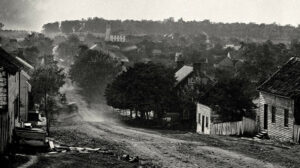 They were caught up in the social, economic, and political issues of the time.  Sharpsburg became a hotbed of turmoil during the Civil War. Three major military campaigns would pass through the region, with almost ¾ million soldiers. The Union soldiers garrisoned in the area would lead to numbers of small unit incursions by the by combatants. For the civilians living in the wake of these man-made disasters, the effects of the military actions lasted weeks, months and even years. 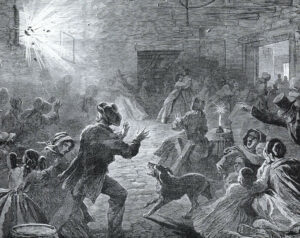 Kretzer cellar during the Battle of Antietam

Sharpsburg was the first organized community in the United States to suffer widespread damage from both combat and the sheer presence of the opposing armies during the Battle of Antietam in September 1862.  The men, women and children that lived in Sharpsburg were ordinary people like you and I, caught up in the extraordinary circumstances of the times. “The war exploded on their thresholds, and the wake from that explosion rippled for miles.” Their story is no less important than that of the soldiers who fought in their cornfields, along country roads or across the Antietam. The war had forever changed the lives of the residents of Sharpsburg and that legacy can still be seen today. 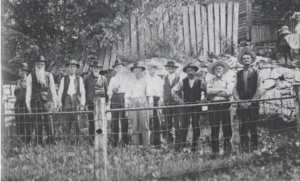 Men of Sharpsburg by the Great Spring, 1907

Now you can join the Antietam Battlefield Guides for a Specialty Tour of “Civil War Sharpsburg“.  Chief Guide, Chris Vincent and local historian John Schildt have formatted a 3-hour guided tour of historic Sharpsburg.   During the tour visitors will  learn about the history of Sharpsburg, examine how tragedy and hardship touched the lives of the citizens of town, reflect on their experiences and the legacy of the Civil War.

For more information about how to book this Specialty Tour or a battlefield tour of Antietam, contact the Antietam Museum Store at (301) 432-4329.

Posted in: Things to Do
Tags: Battlefield Guide, Civil War, civilians during the battle, Sharpsburg