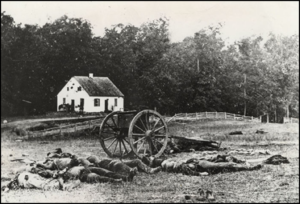 The Dunker Church and debris after the battle

For those that remember the PBS series “The Civil War” by Ken Burns, the opening scenes begin with this statement:
“The Civil War was fought in 10,000 places, from Valverde, New Mexico, and Tullahoma, Tennessee, to St. Albans, Vermont, and Fernandina on the Florida coast. More than 3 million Americans fought in it, and over 600,000 men—2 percent of the population—died in it.  American homes became headquarters, American churches and schoolhouses sheltered the dying, and huge foraging armies swept across American farms and burned American towns. Americans slaughtered one another wholesale, right here in America in their own cornfields and peach orchards, along familiar roads and by waters with old American names.” 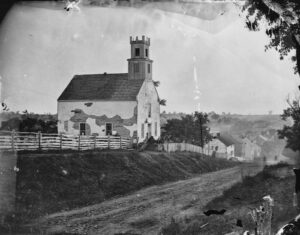 Lutheran Church in Sharpsburg after the battle

No where was this more true than here at Sharpsburg.  The Battle of Antietam had effected everyone living in and around Sharpsburg. The battle only lasted one day but for the civilians living in the wake of this man-made disaster, the effects of the battle were felt for weeks’, months’, and even years.

Sharpsburg was the first organized community in the United States to suffer widespread damage from both the combat and the sheer presence of two opposing armies of more than 120,000 Rebel and Yankee soldiers and some 50,000 horses & mules. 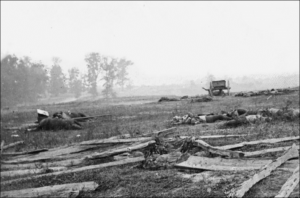 The debris of battle

This would led to a tremendous threat of disease from the thousands of dead men and animals rotting in the warm September sun and the thousands of wounded left to be cared for in the field hospitals.

Combat and disease were not the only threats posed by the large battle. Economic devastation loomed as an all-too-real possibility. At Sharpsburg  soldiers from both sides raided farms and homes, carrying off valuables, destroying property, and confiscating livestock and crops as provender for the armies. 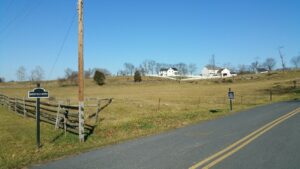 The Antietam National Battlefield is said to be one of the most pristine and well restored Civil War battlefields. When you look across the landscape little has changed since that fateful day of September 17, 1862. The preserved fence lines, fields and woodlots help us understand the ebb and flow of the battle. The details of the Battle of Antietam are well known to students of the Civil War, but as you survey the battlefield, you see scattered across the countryside the proof that battles are not fought in a vacuum. Several farmsteads dot the landscape as well. We tend to forget about the civilians that were caught up in the events swirling around the homes where for generations families lived, worked, played, and died.

The tour will take you to each of the eleven farmsteads across the battlefield to discuss:

Who lived on the farmsteads at the time of the battle? 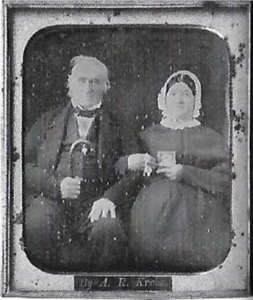 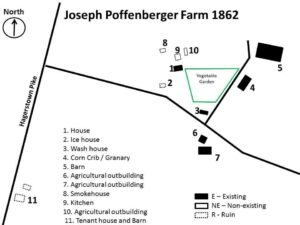 What did the families do during the battle? 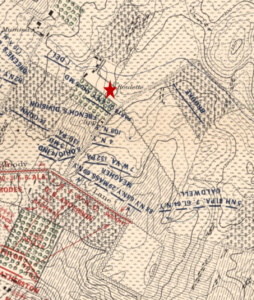 What happened to the families and farms after the battle? 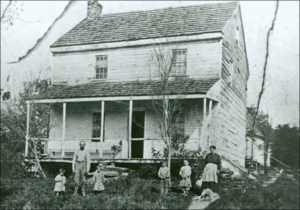 For more information about this tour and other Specialty Tours offered by the Antietam battlefield Guides, contact the Antietam Museum Store at 301-432-4329.

2 thoughts on “The Farmsteads of Antietam Tour”