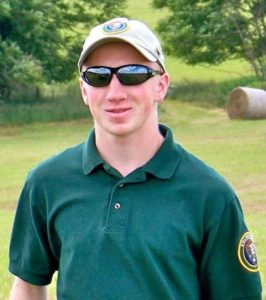 Kevin Pawlak is the Director of Education for the Mosby Heritage Area Association and an Antietam Battlefield Guide. He graduated in 2014 from Shepherd University with a major in Civil War and 19th Century America and a minor in Historic Preservation. Kevin has worked at Harpers Ferry National Historical Park and completed internships with the Papers of Abraham Lincoln project at the Abraham Lincoln Presidential Library in Illinois, as well as at the Missouri Civil War Museum. He currently sits on the Boards of Directors of the Shepherdstown Battlefield Preservation Association and the Save Historic Antietam Foundation.

Kevin wrote his first book, Shepherdstown in the Civil War: One Vast Confederate Hospital, which was released in August 2015. He also authored: “The Heaviest Blow Yet Given the Confederacy”: The Emancipation Proclamation Changes the Civil War”, a part of the Engaging the Civil War’s Turning Points of the American Civil War. Kevin is a regular contributor to the Emerging Civil War blog and co-authored a book in the Emerging Civil War series, To Hazard All: A Guide to the Maryland Campaign, 1862.

The Emancipation Proclamation is one of our country’s most misinterpreted documents. Often seen as a bland and blank document of Lincoln’s lacking the flair of his Gettysburg Address or his Second Inaugural Address, the Emancipation Proclamation in fact proved to be one of the Civil War’s major turning points from a diplomatic and military standpoint. It also upped the ante on the war, for as of the Proclamation’s issuance on January 1, 1863, there were only two possible outcomes of the Civil War: either two separate nations would emerge, one with slavery and the other without, or there would be one reunited country without the institution of slavery.

On Wednesday, August 15th,  Kevin Pawlak will present his talk, “‘The Heaviest Blow Yet Given the Confederacy’: The Emancipation Proclamation Changes the Civil War”.