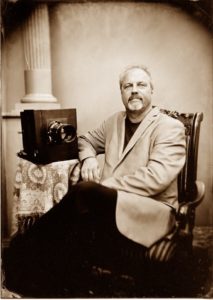 Stephen Recker is a collector of rare Antietam photographs and relics. Items from his collection can be seen on battlefield waysides, in the newly renovated museum at Antietam National Battlefield, as well as in his book Rare Images of Antietam, and the Photographers Who Took Them. Recker is a member of Antietam Battlefield Guides, a service he founded in partnership with WMIA, the non-profit at Antietam National Battlefield. He produced Virtual Gettysburg, a critically acclaimed interactive Civil War battlefield tour; Antietam Artifacts, a CD-ROM with images of rare postcards from the Maryland Campaign of 1862; and www.virtualantietam.com, and recently edited and published Shadowing Grant: Reminiscences of the United States Hospital Transport Services in the Civil War 1864-65. He began his professional career as a lead guitarist, recording and touring with Al Stewart, the Spencer Davis Group, Mary Wells, and Tommy Chong, and as technician for Ringo Starr, Kiss, Diana Ross, and Madonna. In multimedia, he produced for Apple Computer, Adobe, and the Smithsonian, and was named a “Top 100 Producer” by AV Multimedia Producer Magazine. He is currently a Senior Associate – Drupal Developer at ICF International in Fairfax, Virginia, where he has worked on web sites for the White House (ONDCP), The Department of Defense (ATF), and others. Recker is a graduate of Boston’s Berklee College of Music and lives with his family in Maryland.

O.T. Reilly: Sharpsburg Relics and Remembrances: Oliver Thomas Reilly was born in Keedysville in 1857 and at the age of five witnessed the Battle of Sharpsburg. At fifteen, he become the first Antietam Battlefield guide and escorted many notable veterans around the field, including James Longstreet and Ambrose Burnside. In the 1890s, Reilly moved to Sharpsburg and opened his War View and Relics Shop near the town square, from which he published picture postcards and a guide book of the battle. Starting in 1887, Reilly wrote a weekly newspaper column chronicling the movement of veterans and relics through his shop and through the town. It is this unique trove of historic remembrances that is the basis for Stephen Recker’s upcoming book on Reilly, and for his talk. Recker is a leading expert on Reilly.

On Wednesday, July 25th,  Stephen will talk about O.T. Reilly and will bring rare O.T. Reilly relics for the group to enjoy during his Summer Lecture Series talk – O.T. Reilly: Sharpsburg Relics and Remembrances