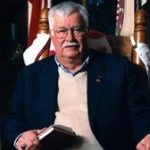 He has presented programs on Civil War Medicine for the National Park Service, Smithsonian Institution, Civil War Institute of Gettysburg College, and Round Tables and Historical Societies across the country. Since retiring from his dental practice, Gordon has become active as a Licensed Guide at Antietam National Battlefield

On Wednesday, June 6th, Gordon will present our first Summer Lecture Series talk “Disease and Treatment{???} during the Civil War”.  3 out of 4 soldiers who died during the civil war  were due to disease. Gordon will examine what these diseases were and their “so called” treatment.