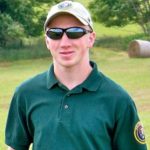 Kevin Pawlak is Director of Education for the Mosby Heritage Area Association and works as a Licensed Battlefield Guide at Antietam National Battlefield. Kevin also sits on the Board of Directors of the Shepherdstown Battlefield Preservation Association, the George Tyler Moore Center for the Study of the Civil War at Shepherd University, and the Save Historic Antietam Foundation. Previously, he has worked and completed internships at Harpers Ferry National Historical Park, The Papers of Abraham Lincoln at the Abraham Lincoln Presidential Library, and the Missouri Civil War Museum. Kevin graduated in 2014 from Shepherd University, where he studied Civil War History and Historic Preservation. He is the author of Shepherdstown in the Civil War: One Vast Confederate Hospital, published by The History Press in 2015.

On Wednesday, August 2nd, Kevin will present his Summer Lecture Series talk – “Water to his Front, Water to his Rear: Robert E. Lee Defends the Confederate High Water Mark at Sharpsburg, September 17, 1862”. There is perhaps no other decision that Robert E. Lee made in his entire military career that is more criticized and questioned than his decision to stand and fight outside Sharpsburg, Maryland in September 1862. What compelled him to fight with a river at his back and a superior enemy in his front? Or is it even as simple as that? Regardless, Lee beautifully orchestrated his obstinate defense at the Battle of Antietam, and brought on the bloodiest single day in American history. In the annals of the Army of Northern Virginia’s history, it was one of the army’s best days.