Antietam is said to be one of the most pristine and well preserved Civil War battlefields.  When you look across the landscape little has changed since that fateful day of September 17, 1862.  The preserved fencelines, fields and woodlots help us understand the ebb and flow of the battle.  The details of the Battle of Antietam are well known to students of the Civil War, but as you survey the battlefield, you see scattered across the countryside the proof that battles are not fought in a vacuum.  Several farmsteads dot the landscape as well.  We tend to forget about the civilians that are caught up in the events swirling around the homes where for generations families lived, worked, played, and died.  One of the most frequently asked questions from our guests is about the families that lived in and around Sharpsburg.

In the early 1700’s very few people lived west of Frederick.  To induce immigrants into western Maryland, land was being offered at very low prices; and people with disposable wealth began to purchase large tracts of land.  Since 1738, Joseph Chapline, Sr. had been acquiring hundreds of acres of land along the Potomac River through grants and purchases.  When war with the French and Indians erupted in 1754, Chapline was called upon to assist his friend and Maryland Governor, Horatio Sharpe.  As a Captain, Chapline would help finance and build forts along the frontier.  For these efforts, Captain Chapline received over 10,000 acres adjacent to his existing estate from Governor Sharpe after the war in 1763.  In honor of his good friend, Chapline established the town of Sharpes Burgh.  Totaling more than 15,000 acres, or 24 square miles, in the Antietam Valley, Joseph Chapline was one of the largest landholders west of Frederick town. 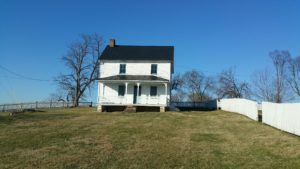 Joseph Chapline died on January 8, 1769, and in his Last Will and Testament, the huge estate was divided among Joseph’s nine children.  Just east of Chapline’s plantation estate, known as Mount Pleasant, lay a 1,484 acre tract called ‘Loss and Gain’ that was devised to his son, James Chapline (the Joseph Poffenberger Farmstead was originally part of the large estate).  It is almost certain that it was occupied by a tenant when James inherited the property.  Although there is no record, the architectural evidence  indicates that the construction of the 1 1/2 story log house dates to 1770 with a 2nd story added circa 1790. 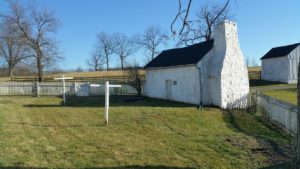 During this period James began leasing and selling family farm-sized tracts of 100 to 300 acres.  Robert Smith purchased a number of these 100-acre tracts and in 1813 sold 272 acres to Christian Middlekauff.  In addition to the house, the farm consisted of a shed, the wash house, and a wagon shed & corn crib.   In 1820, Middlekauff’s daughter Rosanna married Daniel Finifrock and according to the census, it appears that Rosanna and Daniel moved onto the property.  Over the next thirteen years they would have seven children together. 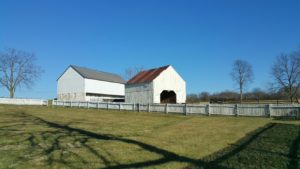 In 1828, Rosanna’s father, Christian Middlekauff died and her brother-in-law, David Neikirk was left in charge of the estate.  The following year Neikirk sold the farm to Daniel, presumably to settle the estate.  In 1833, Daniel mortgaged the property to his neighbor, Jacob Coffman, obtaining a $3,000 loan and given ten years to repay him.  Several other structures were built around this time, suggesting that Daniel used the loan to pay for some improvements to the farm.  The bank barn and equipment shed were built and an ice house and smokehouse were added completing the farm complex. 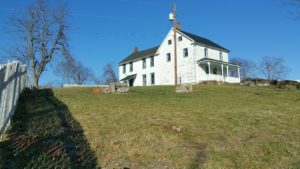 Tragedy struck that same year with Rosanna dying in August, followed by Daniel just two months later in October.  With no disposition of the property recorded after the Finifrocks’ passing, it’s believed that the seven orphaned children remained on their parents farm for the next ten years.  With the loan not satisfied, Jacob Coffman assumed ownership of the property in 1843. It’s possible that the Finifrock children remained for a while as tenants but by the 1850 census, Joseph and Mary Ann Poffenberger were living on the 124-acre farm.

On February 8,  1838, Joseph Poffenberger and Mary Ann Coffman were married. The youngest son of Adam Poffenberger, Joseph was born on July 26, 1812.  Joseph’s grandfather, John was Washington County’s first resident with the Poffenberger name.  As a skilled artisan, John operated blacksmith shops and forges which produced such a large volume of smoke, that the village built up around his works was called Smoke Town. 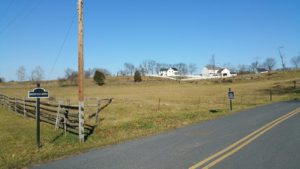 Location of tenant house at southwest corner of property

In 1852, Mary Ann’s father, Jacob Coffman sold his son-in-law the 124-acre area plus an additional 20 acres he had most likely parceled off his property along the Hagerstown turnpike to increase the farm to 144 acres.   Over the next ten years, Joseph would increase the size of his farm to 166 acres.  Mary Ann and Joseph had no children,  but with the substantial number of Poffenbergers in the Sharpsburg and Washington County area, they would have taken in relatives in need.  His nephew, Josiah Poffenberger is listed on the 1860 census as a farm hand and the couple also took in a young boy named Isaac Mallet.  They had a tenant, Samuel Kretzer who most likely lived in a tenant house on the southwest corner of the property along the Hagerstown Turnpike. 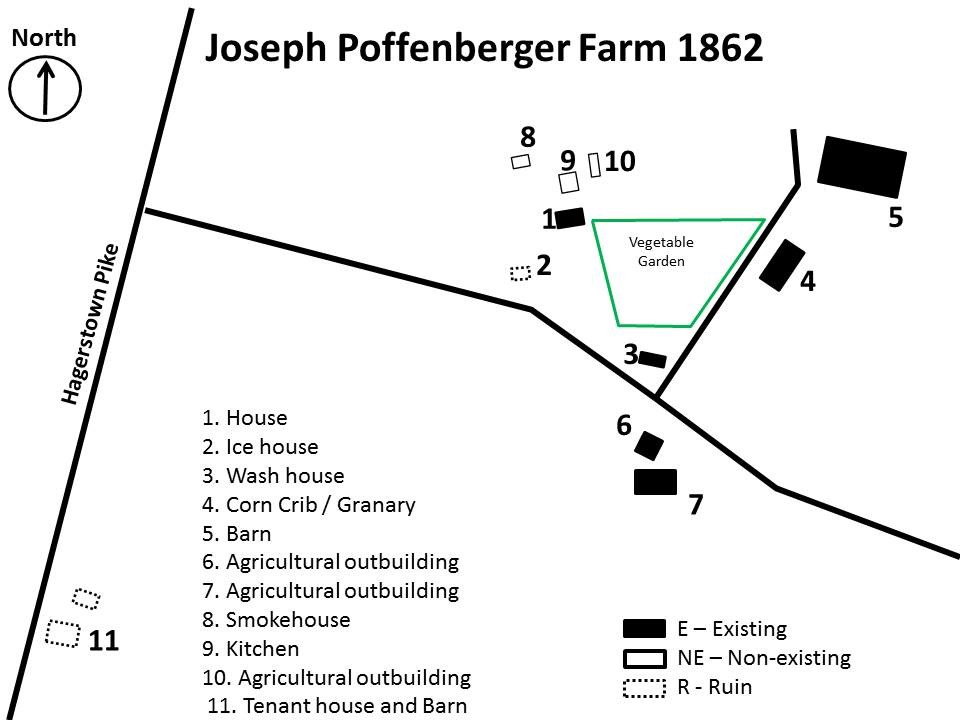 Over the summer and into the fall of 1862, Joseph Poffenberger, like all of his neighbors had worked to harvest their crop of wheat, flax, corn and clover.  Straw was stacked high in the barnyard and the produce from the orchard around the house filled Mary Ann’s cellar with “apple, peach, and plum butter, barrels of pickles and preserves of all kinds. Hundreds of pounds of smoked meat hung in the storehouse, and there was even a barrel of whiskey.”  Unfortunately they would not stay to enjoy the fruits of their labor knowing that Union and Confederate forces were quickly approaching Sharpsburg. 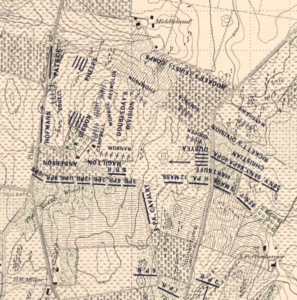 Position of Union forces across the Joseph Poffenberger farm as the battle erupts on the morning of September 17, 1862.

Before leaving the farm Joseph moved all his horses and locked up the storehouses and cellars.  It is unclear where the Poffenbergers went during the battle but with both having family in the area they may have stayed with relatives at a nearby farm.  By the afternoon of September 16, the Union First Corps occupied the whole Poffenberger farm, with artillery taking up positions on the ridge directly behind the house.  Major General Joseph Hooker, the First Corps commander, made his headquarters in the barn as the battle erupted in the East Woods at the southern edge of the Poffenberger property.  As day broke on the morning of the 17th, Confederate artillery fire from batteries on Nicodemus Heights and near the Dunker Church began raining down on the Union positions.   As the battle ebbed and flowed to the south through D.R. Miller’s cornfield, the Union First Corps soldiers found themselves back where they started twelve hours before; at the Poffenberger farmstead. 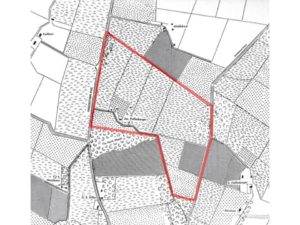 The red line represents the approx. boundary of farm when NPS acquired the 120 acre farm in 2000. Additional acreage was to the east across Hagerstown Pike and on the west along the Smoketown Road.

When Joseph returned that evening he recalled, “… my house it was completely empty. I had nothing left. I lived on army crackers that I found on the battlefield for five days.”  The damage was significant according to Jacob Eakle, who visited shortly after the fighting ended, and he stated the “farm was a perfect wreck after the battle, crops destroyed, house riddle and every thing taken out.”  The most significant damage occurred in the days after the battle as Union soldiers plundered his farmstead using his fields for horse’s of the army’s wagon trains, taking up the fences for firewood, and carrying off forty-ton of straw and hay for army stock and bedding for soldiers.

The Union army encamped on the farm until October 20, 1862, and used up the resources that Joseph and Mary Ann Poffenberger had stored for the coming winter months.  According to Poffenberger’s claim against the Federal government, his losses included:

This claim of $2,277.55 was “disallowed” by the government “because the proof of the stores and supplies was insufficient” and they were “not convinced that the stores and supplies were actually taken and used by the United States Army.”  Joseph would go to his grave without receiving reimbursement from the government. Five years after his death in May 1893, Lawson W. Poffenberger, the executor of Joseph’s estate was awarded $1918.00 for a resubmitted claim of $2,721.50. 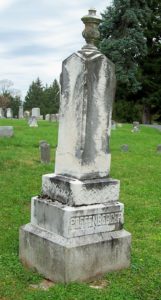 The greatest loss of the Poffenberger family would be the death of Mary Ann, just two years later, on August 12, 1864.  Like many of Sharpsburg residents, it is possible that her death was a result of the rampant disease that took many of Mary Ann’s neighbors following the battle.  Joseph never remarried but continued to live and work on his farm.  With help from his nephew Alfred Poffenberger, who had leased the Mary Grove Locher farm in the West Woods at the time of the battle, Joseph was able to increase production and add another 28 acres to the farm.

By 1880, Alfred had moved to Iowa and Joseph turned over the operation of the farm to his nephew, Otho J. Poffenberger and his wife Elizabeth.  Joseph would move to the tenant house to allow Otho and Elizabeth room in the main house to raise their children.

Joseph Poffenberger passed away on June 13, 1888 at the age of 76.  Joseph and Mary Ann Poffenberger rest together at the Mountain View Cemetery in Sharpsburg.

Otho had purchased the farm, updating the house and building on a rear addition.  In 1895, the War Department purchased property from Otho in order to build a tour road known as Mansfield Avenue, which allowed for the placement of monuments, tablets and markers. 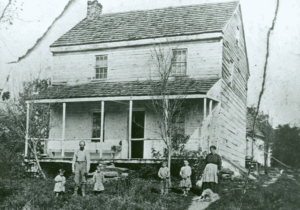 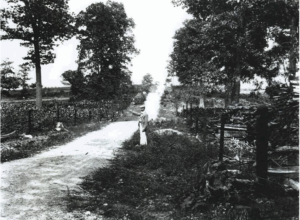 Otho would continue to live and manage the farm until his death in 1932, when his son, Joseph W. Poffenberger purchased the farm.  In 1944, Joseph and his wife Bertha deeded the property over to Elmer L. Poffenberger who would later sell the farm to Fred and Renee Kramer in 1966. The last transfer of the Joseph Poffenberger farmstead occurred on June 8, 2000 when the National Park Service purchased the property from the Kramer’s.  Since that time the Park Service has stabilized the structures and restored the landscape to its post-war appearance.  Like the other farmsteads throughout the battlefield, the Poffenberger farm is an eyewitness to history. 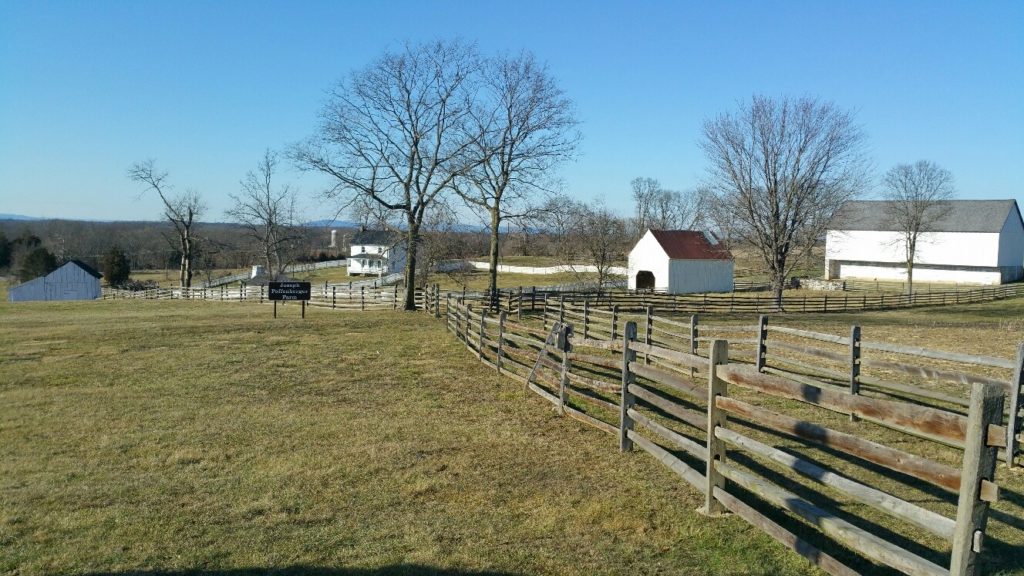 2 thoughts on “The Farmsteads at Antietam – Joseph Poffenberger Farm”