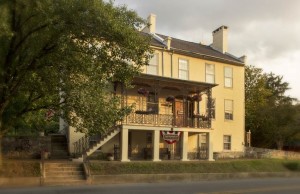 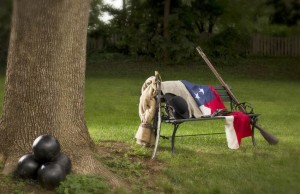 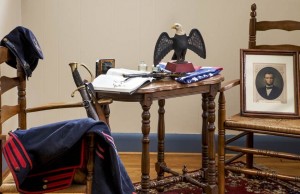 The history of our old house has been traced through deeds and probate court records of Washington County back to an 1804 deed from Joseph Chapline II to Jane Ferguson. The information given below on the Chapline family is taken from “The History of Sharpsburg” by Lee Barron.

The Chapline Family and the Settlement of Maryland

Isaac Chapline was born in England in 1585, he became a Captain in the Royal Navy. In 1606 he married Mary Calvert, daughter of Leonard Calvert. (the founding family of Maryland) In 1622 Isaac and Mary immigrated to America settling in what is now Southern Maryland on the Patuxent River near Cedar Branch.

By the early 1700’s the population was already shifting to the west and there was great interest in settling the land of the great valley beyond the Blue Ridge. So in 1730, William Chapline, then living along the Potomac just south of present day Washington, D.C., moved westward settling on 465 acres just 4 miles upstream from Shepherdstown, Virginia.

His son Joseph shortly thereafter received a grant of 2175 acres from Lord Baltimore to establish his own estate. This was to be along the Potomac, 2 miles downstream from his father’s Virginia estate, but on the Maryland side of the river.

In 1739 Joseph Chapline began construction of his estate, “Mt. Pleasant”, moving there in 1740. (“Mt. Pleasant” is located in the area of Snyder’s Landing, just one mile from Sharpsburg). After moving to “Mt. Pleasant” Joseph’s fortunes soared, he was a part owner of the Ohio Company, which traded the Indians manufactured goods for furs, and built a two-story log storehouse at Wills creek on the Virginia shore. He served as Justice of the Peace, and also as elected representative of Frederick County to the General Assembly in Annapolis.

When the French and Indian War broke out Joseph raised and organized troops, financed the war effort, and helped build Ft. Cumberland and Ft. Frederick along the frontier. For his war efforts Joseph Chapline received an additional 11,000 acres of land from Gov. Horatio Sharpe of Maryland and 645 acres from Lord Fairfax of Virginia.

The Founding of Sharpsburg, Maryland

Following the restoration of peace in 1763, Joseph took a 300 acre parcel of his land surrounding a large constant spring, surveyed 187 lots, and on July 9th, 1763 founded the town of Sharpes Burgh naming it for his good friend Gov. Sharpe. Each lot was 103 by 206 feet and initially were sold for 2 pounds, 10 shillings. By the time of his death in 1769, Joseph had sold 84 lots mostly to speculators, but a few houses had also been built.

Joseph Chapline II was born in 1746 at “Mt. Pleasant”. After his father’s death he took over the development of the town, and built the first stone house in 1769. (229 W. Chapline St.). In 1770 he married Mary Ann Christian Abigail Ferguson, of Frederick Towne. Like his father before him he was appointed Justice of the Peace for Frederick County. When the American Revolution started he was appointed Captain and organized a group of volunteers “The Sharpsburg Select Militia”. Joseph and Mary Ann Chapline did not have any children.

On February 18, 1804, Joseph and Mary Ann Chapline sold the lot on which our house stands to Jane Ferguson and her brother John White Ferguson. Jane and John Ferguson were Mary Ann Chapline’s relatives. Along with the land the Chapline’s gave them a house. The deed states that the Ferguson’s paid “Five Pounds current money” and they also promised that “every year forever on the ninth day of July the annual rent of three shillings and six pence current money of Great Britain” would be paid to the heirs of Joseph Chapline. The deed emphasizes that the sale included “the half of the aforesaid lot which has the premises and improvements”. At this time the lot alone was valued at 5 pounds. Additional language has both Joseph and Mary individually attest to their intentions. As the Chapline’s had no children, they made sure their gift of the house would not be contested when they passed away. This first structure built by Joseph Chapline evolved into today′s building.

The Next 200 Years of Sharpsburg, Maryland History at Our Inn

The earliest existing construction is the eastern side of the present building. This was once a free standing three story home. The street level room on that side of the building contains a large cooking fireplace. The second and third floors contain the Inn’s Thomas Jackson and Harpers Ferry guest rooms. In 1832 the property was sold to John D. Grove. John D. Grove was elected to the Maryland General Assembly in 1832, and again in 1833 and 1838. He ran a tavern in Sharpsburg in the 1830’s and 1840’s which was the site of many meetings and auctions frequently advertised in the Hagerstown Torch Light newspaper. Grove expanded the house by adding the present western section and tied the new construction to the old with brickwork. Grove’s construction used high brick parapet walls to give the building a distinctive look. The same style brickwork, as well as fanlights over the entrance door were employed on other Grove family houses in the area. On the ground floor of this section in the old horsehair plaster of a storage room is the date 1835, and the initials “WS”, written by someone’s finger into the wet plaster. The attic bedroom, no longer used, has the name Lewis Grove and the date Feb 7, 1844 penciled in longhand on the plaster.

In 1859, “Isaac Smith” came to town, a prospector, he said. He rented the old Kennedy Farm a few miles out of town on the Harpers Ferry Road. On occasion he was observed hauling heavy wagon loads past our house. Some said he was picking up mining equipment from the B&O station just past Shepherdstown. One rainy day he couldn’t make the steep grade with his overloaded wagon coming up from the Potomac crossing at Ferry Hill. Henry Kyd Douglas who lived at Ferry Hill got his fathers horses and helped pull the old man up the hill and a mile onward toward Sharpsburg. Shortly thereafter John Brown and his men attacked the Government arsenal at Harpers Ferry. That old man slipping in the mud was really John Brown and the crates in the wagon were really pikes and carbines. And Henry Kyd Douglas went on to become a Colonel in the Confederate army and a staff officer of Stonewall Jackson. When Douglas died he left a manuscript for a book he had been working on. The manuscript for “I Rode With Stonewall” was left to his only heir John Kyd Beckenbaugh. Beckenbaugh became Superintendent of the Antietam Battlefield and lived in our house in the 1930’s. After lying dormant for all those years Beckenbaugh got a publisher for “I Rode with Stonewall” and it has been a Civil War bestseller ever since.

During the Civil War years, Sharpsburg was a border town of a border state. The Potomac River was the border between the Union and the Confederacy. Sharpsburg also lay in The Valley. The Valley is a geographical feature that runs for hundreds of miles. In Virginia it is called Shenandoah Valley, cross the Potomac and it is the Great Valley or Cumberland Valley. Once in Maryland it is a short distance to Pennsylvania where The Valley conveniently curves northeast towards Harrisburg and Philadelphia. This made it an inviting route for easy troop movement or invasion. Consequently the town was involved in continual border skirmishes starting in 1861.

In August of 1862, Samuel and Elizabeth Showe bought the property from John D. Grove’s estate. Within several weeks the Army of Northern Virginia, commanded by Robert E. Lee occupied Sharpsburg. General Lee decided to wait here and let George McClellan’s pursuing Union Army catch up. The resulting Battle of Antietam (called the Battle of Sharpsburg in the South), is still the bloodiest day in American history. During the Battle the town came under artillery fire and our summer kitchen was hit by 3″ solid shot. Many houses in Sharpsburg were damaged and a few still show their scars. Following the battle our house was used as a field hospital to treat the wounded.

1863 saw armies on the march again through Sharpsburg in Lee’s second expedition into the North, and then again in the retreat from Gettysburg.

In 1864 Henry and Martha Rohrbach (Martha Ann Piper) bought our house from Samuel and Elizabeth Showe. In 1862 the Rohrbach’s farm along the Antietam Creek had been surrounded by the battle for Burnside’s bridge. They had lost their daughter and granddaughter as a result of the fighting. Now they were getting old and wanted to give up farming so they moved into town where they also had a store. But the war had not ended. On July 4th in the early morning some Confederate scouts slipped into Sharpsburg. They were men of Mosby’s Rangers and part of a cavalry screen for Jubal Early’s advancing army. There was a knock on the door and Mosby’s men were soon in the house demanding the keys to the stable where Jacob Rohrbach’s horse was quartered. Jacob was Henry’s twin brother who was living with them at the time. As Mosby’s men climbed the staircase and entered Jacob’s room, Jacob suddenly woke and one of the men shot him dead. The next day Jubal Early’s army forded the Potomac at Shepherdstown and marched past in what was to be the final Confederate raid on the Union capital.

The house remained with the descendants of the Rohrbach’s until 1945. During this time they occasionally rented it out, as in the 1930’s when John Kyd Beckenbaugh lived here. In 1945 the house was sold to Theodore Hebb. As many Sharpsburg residents had since the opening of the C&O Canal in the 1830’s, Ted Hebb’s father, Augustus Hebb, had been the captain of a canal boat. Hauling coal and grain to the cities downstream, canal boating was a family affair. Everyone worked and lived on the boat during the long season. The C&O Canal National Park has done a feature on the canal boat families on their website. The park service has a picture of young Theodore Hebb on the boat with his family in the early 1900’s which they once displayed on their website.

In 1986 the house was purchased from Theodore Hebb by the Yeager family. After five years of restoration the Yeager’s officially opened the doors in June of 1991 as the Jacob Rohrbach Inn with two guest rooms. In the summer of 1998, the Inn was sold to Paul and Joanne Brietenbach. Over the next sixteen years the Brietenbach’s made many improvements: two more guest rooms were added, the porches were covered, landscaped gardens added, and the original summer kitchen was converted into a separate cottage.

In 2015, Chris and Amy Vincent became the new Innkeepers along with their two Shih Tzu’s – Maya & Zoey. They look forward to leaving their mark upon this grand and historic home.